Do you ever peruse Drudge in the morning and bust out laughing just reading one of his headlines?  Because you know that said article is going to cause some kind of uproar whether warranted or not?  That happened to me this morning.  From the article:

360 calories less a day.  Now, I don’t work outside the home and there is no way that I am burning an extra 360 calories a day on house work than my working mother counterparts.  Namely because of modern conveniences.  Housework is far easier than it used to be.  However, even taking out gym time, I am sure that I am on my feet far more than those women stuck on a cubicle on a daily basis. 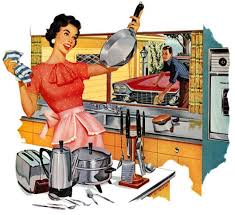 Think about this for a minute.  It takes approximately 3500 calories to burn a pound (yes, I do know it’s more complex than this, but let’s just go with what the article presents right now.  Obviously this is not the whole story given how drastically our diet has changed in the past 50 years.  This is much more likely to be the culprit of our obesity epidemic, but daily movement does factor into it).  This means that in a bit less than 10 days, our 1965 counterparts have burned a pound of calories.  Approximately 36 pounds a year.

I have to wonder, how is this study going to go over with the general public?  Nah, I know the answer, but it’s still interesting to think about.

Speaking of diet, check out Keoni’s latest.  It parallels nicely with the guest post Phedre recently wrote for us.