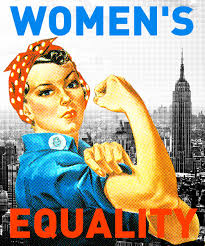 I have been reading Matt Forney’s Twitter with utter fascination recently. Since his Self Esteem post went viral the conversations he’s had with many people there are not only funny, but eye opening.

I was reading one conversation last week (I have no idea which one it was, there have been several and they’re pretty much all the same), and it hit me just how much women really do not want equality.  Now, this is something I have always known, but it really became crystal clear after reading these conversations.  Very often, there would be a woman, a few red-pill men, and a white knight.  It was always the red-pill men who treated these women as an equal.  Always.  This equal treatment was met with snark, anger, or shaming.  Enter the white knight and his attempt to save her.  It’s never asked why she needs help.  Why does this man think that this strong and equal woman needs his help?  Finally, the woman, having accepted this help, gives some indication of, “See?  This guy agrees with me!” or “Thank you White Knight for supporting me” and then we see her relief or obvious validation for this guy having done so.

And we see this often.  We see it with women lamenting the loss of chivalry. We see it in women hating to be spoken to like a man from a man.  We see it at work with women asking men to help them with their own responsibilities, and we see it in a lot of other small and larger ways.  Well, there is now a new study out that highlights the fact that most women tend to be just fine with benevolent sexism.  I’m really curious to see what the feminist response to this is going to be.  I’m pretty sure I already know . . .

Just to say it again, we’re either equal (the same) or we’re not.  If you ask a woman or white knight why this brand of sexism is ok, it will be some form of, women deserve respect and this guy was respecting me while the misogynists were not.  Respect between men and respect between women are not the same.  If we want equality, women need to expect to be treated like the world they want to live in. The world of men.

**The synchronicity around this place is starting to startle me a bit.  I’ve been planning on writing about this since last week.  Then the link to this Daily News article shows up this morning.  I have another draft I’ve been working on where the idea popped into my head on a Sunday and Leap of a Beta wrote something about it the next day.  It’s stunning to me.