It’s time to make applesauce here.  Thankfully, the apples are in season for quite a while as I am late making it this year.  I use this recipe from pickyourown.org to make applesauce as when done this way, you needn’t add any sugar to it.  The best part is, it is just as sweet, if not sweeter than the stuff you by from the grocery store.

Start out with several different types of apples.  You’re going to want to stick to the sweeter varieties such as Red Delicious, Golden Delicious, Gala, Stayman, Winesap, Honey Crisp, McInstosh and the like.  I usually use a higher ratio of Red and Golden Delicious and then add whatever else I can find at the market.  If you don’t want to add sugar, you should really stay away from Granny Smith.

Before you start anything, get your jars in the dishwasher so it can run while you’re cooking.  If you have a sanitize function, that’s the best.  Choose more jars (don’t forget new lids and your rings as well) than you think you will need so you don’t end up stuck without having any clean jars.

I recommend using an apple cutter if you are going to be making a large batch as it will cut down quite a bit on your time.  If you plan on canning, you should plan on at least half a bushel of apples  as, while homemade apples sauce is excellent, you don’t get a huge amount when all is said and done.  I use my two largest stock pots and overfill them with cut apples (this ends up being just under half a bushel).  Just cut them up and throw them in the pots skin, seeds, core and all.  The skins add extra color and more nutrients and it just saves time doing it this way.  When you are finished cooking them, you will run the apples through a Foley Sieve or, better yet, a food strainer** (if this is something that you plan on doing every year, I really recommend the food strainer.  They make great Christmas presents!) 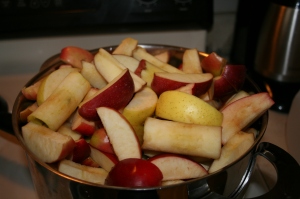 Next, you’re going to want to add about an inch of water to the bottom of your pot and bring it to a boil.  Once it’s boiling hard, turn the heat down and let it keep boiling fairly hard (the link says to turn your heat down to medium high.  This is too hot on my stove and it boils too hard.  It spits if it boils too hard and you do NOT want to get splattered by this stuff.  It get extremely hot.   I turn mine down to about medium if not a bit cooler)  It will be a bit tricky to stir the apples if you heap them like I do, but they cook down pretty quickly. 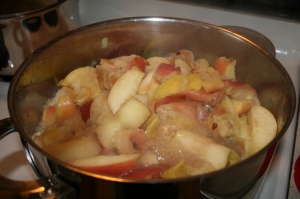 Cook the apples until they are all soft.  Some kinds will cook faster than others and the cores seem to take the longest, so when the cores are soft, it should be done.  Your next step is to run it through the Foley Sieve or your food strainer (while you’re doing this, put water in your canner and start it boiling.  It takes quite a while to come to a boil).  The sieve is time consuming, but it does a very good job.  If you use a food strainer, I recommend running the peels and cores through it twice to remove even more sauce from them.  It will also help thicken the final sauce.

Once you’ve strained it, return all the sauce to the stove, turn on the heat to about medium and add your cinnamon (A little ground clove would be good as well, though today I just did cinnamon).

Use your canning funnel (this just makes the process less messy.  You can get by without one) to fill your jar to 1/4 inch of the top.  I actually go between 1/4 and 1/2 and inch as I’ve had these boil over on me before.  You might get some browning on the top over time, but this is harmless and does not affect the flavor at all.  Next, wipe the rim clean with a wet paper towel to make sure the seal on the lid is unobstructed.  Put the ring on and turn in fairly tight, then back off about a 1/4 of a turn.  This is will let pressure release from the can while in the water bath.

I have just a regular Ball canner and it will fit 7 quart size jars.  Once your water is boiling, put the jars onto the rack and carefully lower the rack into the water.  Once it returns to a boil, start your timer.  The time spent in the water bath will depend on your elevation, so check out the chart for times in step 8 here. 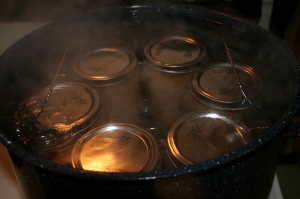 When it’s finished you can use one of these grippers to remove your jars, though my oven mitts have rubber covering the palms and it’s really just easier to use those.  Don’t use just plain cloth mitts for this job or the boiling water will just soak into them and you’ll burn your fingers. 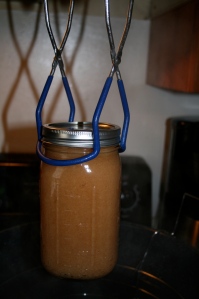 I ended up using just less than 1/2 a bushel of apples and got about 6 1/2 quarts of apples sauce.

** For those not looking to can, but who just want to make some applesauce for dinner one night (better than anything you can get from the store), follow this recipe.  You’re going to do basically the same thing I’ve shown here, but you’ll peel and core your apples instead. If you don’t mind chunky applesauce, you don’t even need to run it through a sieve.  I actually prefer it chunky.